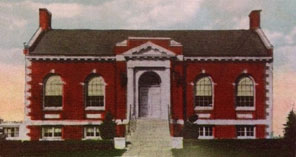 Tilton Library was established in 1915 with funds from the estate of Chauncey B. Tilton, a local mercantile shop owner, and by municipal and private contributions. In the late twentieth century, Tilton Library merged with Old Deerfield’s Dickinson Library to become the town of Deerfield’s public library.

The initial Village Library Association was established in 1871, by a group of South Deerfield citizens. Books could be borrowed for an annual fee of one dollar, and were housed in a small room on the upper floor of a private building. In 1876 the collection was moved to a newly erected room in the Congregational Chapel — now the home of Meeting House books. In 1893 voters elected to use public money to support the library, and the name was changed to South Deerfield Village Library. In 1906 the book collection was moved to the ground floor of Tilton’s Grocery Store, located between the church and the present Tilton Library site.

In May 1900, Mr. Tilton died and left money to create a home for the aged.

After the needs of his family were met, estate trustees appealed to the Supreme Court of Massachusetts to change the purpose of the will. The court ruled that money left for charitable purposes could be used for literary or educational purposes. Tilton Library was dedicated on November 15, 1916. The upper floor of the brick and white marble building served as the town library and the lower level was used as a town assembly room.In 1982, with a town appropriation and the labor and donations of citizens, the lower level was converted to a children’s library. In 1997, a handicapped accessible entrance and library office were added to the south side of the building. Public Internet access became available in 1998 and in July 2006, Tilton Library became a circulating member of the Central/Western Massachusetts Automated Resource Sharing (C/WMARS) consortium.